Panama, the world largest Ship Registry, has been re-elected in Category “A” of the Council of the International Maritime Organization which reiterates the position of the registry and its leadership. Panama has been in Category “A” of the Council since 2003, demonstrating a high level of commitment to the Organization. Only 40 countries of the 174 that are members of the IMO are part of the Council, of which 10 are in Category “A” with the greatest interests in the provision of international maritime services. The Panamanian Registry is one of the oldest registries in the world. It was established in 1917, more than a century later, the Panama Maritime Authority which oversees the Ship Registry continues to be recognized as a responsible Administration, committed to its customers, offering services with high levels of quality, believing in continuous improvement. Panama feels committed to working on behalf of maritime safety, against environmental pollution, ensure that standards on board ships are maintained in favor of its crews and to the empowerment of women in the maritime sector, among other important issues. Panama has its eyes pointing to the future and works to remain a leader in the flagging of ships worldwide, ensuring that they comply with established safety levels. 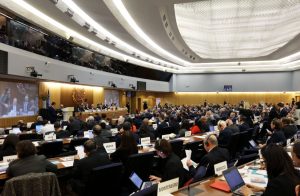