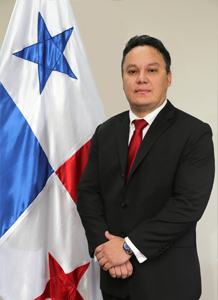 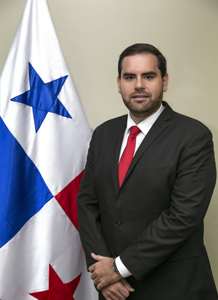 General Director of Public Registry of Property of Ships

Captain Jovani Gonzalez in an Engineer in Nautical Sciences, with Specialization in Administration and Maritime Transportation. He also has a Post Graduated Degree in Higher Education.

He has wide experience ad Merchant Marine Officer, and he has occupied the higher rank as Captain.

He has chaired different positions within the Panama Maritime Authority. He started ad Technical Evaluator of the Office of Segumar Panama from August to October, 2014. Afterwards he was promoted as Sub-Chief of Investigation of Maritime Accidents on the General Directorate of Merchant Marine from October 2014, to August 2015. On September, 2015 he was promoted to the Sub Directorate of Seafarers, until January, 2019, when he was appointed as General Director of Seafarers.

Captain Gonzalez is also a Professor at the University. He is a member of the Panamanian Association of Marine Officers. (APOM).

FERNANDO A. SOLORZANO A.

He is the Director of Merchant Marine of the Panama Maritime Authority. He has been the Administrator of the Panama Maritime Authority, Magistrate of the First Superior Court of the First Judicial District of Panama, Assistant to the Magistrate of the Supreme Court of Justice, Judge of Civil Circuit, Major Criminal Officer and Executive Sheriff of the Court. Solorzano has been Coordinator of Maritime Law and Professor of Regulation Courses of Merchant Marine, Maritime Law and Commercial Law at the Universidad Santa María La Antigua (USMA), and Professor of Maritime Law, Constitutional Law and Political Sciences Courses in the Universidad de Panamá (UP).

Lawyer in exercise since 1990, he has a master's degree in maritime law, and procedural law and a doctorate in law.

He is currently the General Director of the Public Registry of Property of Ships.