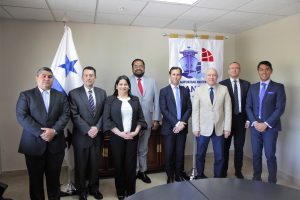 From February 4 to February 15, 2019 a Recognition Audit is being performed on the Panama Maritime Authority by the European Maritime Safety Agency (EMSA), complying with the amended Board of Directors of the European Union No.2008/106/EC, and the International Formation Convention, Titling of the Seafarer’s Guard, amended (STCW’78 amended), with the objective of having the Republic of Panama credited as third country before the European Union, so our competence titles get to be acknowledged by the countries of the European Union, countries with a long maritime trajectory, which may translate into bigger opportunities of employment for our seafarers.

The Maritime Authority of Panama, through the General Directorate of Seafarers started this process on 2016, with technical visits between the Kingdom of Belgium as the applicant country, and the Republic of Panama.

This initiative takes place in order to strengthen the process of formation of officers, standardizing and globalizing the titling process, thinking ahead to be able to export quality human resources, that comply with high standards according to what is regulated by the International Conventions and to be able to guarantee the safety on the ocean, and the rights and obligations that each position requires.

The Audit includes the General Directorate of Seafarers, the International Maritime University of Panama (UMIP), Columbus University and different Centers of Maritime Formation to whom this Maritime Administration has delegated the task of forming seafarers.

The team of inspectors of the EMSA is formed by: Daniel Rodes García, Mircea-Tinel Udrea, Jaime González Gil and Antonio Hevia Rodríguez as chiefs of staff.

This Audit marks the beginning of the process of recognition by the European Union. This process opens the communication ways to reinforce the cooperation bonds in matter of seafarers and as a bridge that strengthens our economies.

We would also be leaving our country brand in this sector not only being the number one merchant registration in the world, but also having an officiality and bigger international support.